Asahi was developed as a health exercise

The development process of Asahi began in 2004. The idea was to create a fitness training program, which would be easily accessible for people from Western culture. One of the basic goals was to uphold and enhance people’s health and ability to care for themselves for as long as possible. A registered fitness program named “Asahi Health” was developed by Ilpo Jalamo, Timo Klemola, Keijo Mikkonen and Yrjö Mähönen. These four men had a common background as professionals and/or coaches in martial arts and physical fitness. This comprehensive method was engineered to have positive overall effects on the mental as well as the physical state of those who practice it.

Asahi is a trademark

Asahi Nordic is an association established to advance the practice of Asahi as a means to improve health.

Asahi Health is a trademark of the original health exercise Asahi Health. 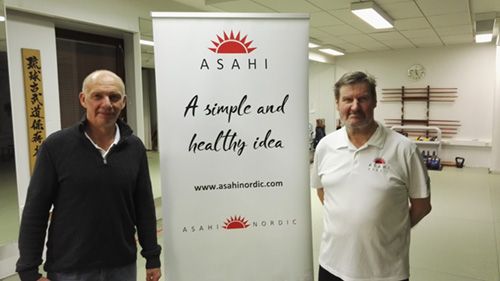 Ilpo Jalamo, coach and internal medicine and geriatrical specialist Yrjö Mähönen are two of the four founders of the Asahi Health. They founded Asahi Nordic system in 2015.

Health practices from Eastern cultures were used as a basis for Asahi, but all the movements are deeply rooted in the principles of Western physical education and Western medicine.

The structure of an Asahi lesson

There are three basic series of movements (Asahi Series No. 1-2-3), which are all structured in the same way: the Relaxation Module, the Neck & Shoulder Module, the Back Module and the Legs & Balance Module. Each segment contains three exercises. In between each module is the Intermediate Breathing Exercise.

An Asahi routine can be constructed in many different ways: it can be done from beginning to end, just one module, or a single exercise. It is also possible to combine single exercises from any of the series to create a longer training session. So, the training session can be anything from a five minute warm-up to an hour of intensive body building, depending on the intent of the person exercising. The whole Asahi practice was designed to be done standing up, but most of the movements can be done just as well in a sitting position or in a horizontal position, if standing is not an option.

The background of the developers can be seen in Asahi

Internal medicine and geriatrical specialist Yrjö Mähönen has been largely responsible for the the medical research related to Asahi. Mähönen has appeared on several health-oriented television programs and has become the personification of asahi: "Asahi-George".

Ph. Docent Timo Klemola has written several books on the connection between physical training and mental training. Klemola was a key person in planning the first training programs and publishing the first documents written about Asahi Health.

Professional coaches Ilpo Jalamo and Keijo Mikkonen drew from over forty years of experience coaching budo. Both men actively contributed to the development of the form and content of the Asahi exercise series. Both Mikkonen and Jalamo have black belts in karate.

Ilpo Jalamo has practiced Chinese tai chi for more than 40 years. Previous to the development of Asahi, he was responsible for importing and introducing several types of Eastern physical training programs that were previously unknown in Finland. He has also authored several books on martial arts.

The first Asahi exercise groups began at the Lauttasaari Sports Center in Helsinki in 2005. Now there are over 700 trained Asahi teachers, who have started groups in all parts of Finland. The groups consist of all sorts of people: old and young, men and women, those who wish to keep up or improve their health, those who are recovering from a disease or injury or have certain special needs. Even top notch athletes practice Asahi as a well-rounded restorative routine after a hard workout.

New Asahi teachers are trained at regular intervals and all four of the developers still actively participate in training programs in their own area. In the same way as yoga has developed to include many approaches, new angles on Asahi are developing also. Mähönen and Jalamo are the head teachers in the Asahi Nordic training program, which adheres to the classic original principles of Asahi. Asahi Nordic is a registered organization, which operates in cooperation with Keijo Mikkonen’s Lautasaari Sport Center and its Asahi center.

Asahi Nordic ry is the only Asahi association operating in Finland. The main goals of the association are to deepen and broaden the research on the health effects of Asahi and to provide a broad professional teacher training program.The Asahi exercises may resemble movements from other sorts of calisthenics, but the principles behind each movement go much deeper than they might appear at first. The Asahi Nordic training program specially emphasizes these deeper principles.

The head teachers Mähönen and Jalamo’s conviction to these principles can be seen in the Asahi Nordic’s charter:

Asahi Nordic – in the name of health

All who are interested in practicing or teaching Asahi can become members of the Asahi Nordic Association. The organization offers the teachers excellent training to maintain and develop their teaching skills. By becoming a member of the association, active practitioners and teachers become part of the movement to spread this practical fitness method throughout Finland and abroad without commercial interests. Promoting health is our united goal.

Joining is easy when you choose the “join” option on this website. As a member you will stay connected to the Asahi network, receive the most current developments through membership newsletters, receive medical hints and advice, and will be qualified to participate in member-only training programs.

Asahi Nordic is a registered trademark. Only certified Asahi teachers are allowed to teach Asahi.

The page you are trying to access requires a login